Mobile Marketing Statistics and Trends to Help You Plan for 2019

Back in 2016, Google announced they were going to introduce a mobile-first index, in which a website’s mobile form was to be used for ranking purposes, as opposed to its desktop counterpart.

A year and a half later, back in late March of this year, they announced that the fabled mobile-first index had finally arrived:

Today we’re announcing that after a year and a half of careful experimentation and testing, we’ve started migrating sites that follow the best practices for mobile-first indexing.

To recap, our crawling, indexing, and ranking systems have typically used the desktop version of a page's content, which may cause issues for mobile searchers when that version is vastly different from the mobile version. Mobile-first indexing means that we'll use the mobile version of the page for indexing and ranking, to better help our – primarily mobile – users find what they're looking for.

As you can see, the need for mobile optimization has never been higher.

After all, if the majority of people who browse the internet are doing it through a smartphone, shouldn’t you present them with a website that offers the best experience for the device of their choice?

In case you’re wondering, yes, yes you should.

To better understand why, let’s first go over some mobile device usage statistics 2018 strategies made use of, and then some statistics you’ll need for 2019.

Mobile Marketing Statistics We Encountered in 2018

Starting with some mobile marketing statistics for 2018, there were over 3.5 billion unique mobile internet users in 2017, a number that grew to 3.7 billion in 2018.

Behind these advertisements was Google, who drove about 95% of all US paid search ad clicks on mobile, followed by Bing (3%) and Yahoo (1%).

One more before we move over to 2019, Facebook had over nine billion daily active mobile users, and 54% of users accessed the platform through a mobile device.

Your Mobile Marketing Statistics for 2019

Now that we’ve touched on some mobile usage statistics from 2018, let’s switch gears and cover some stats and mobile trends for 2019 so we know what the future of mobile marketing looks like:

2. Going into specifics, most of the mobile market growth can be attributed to the increasing popularity of smartphones. For instance, by 2014, around 38% of all mobile users were smartphone users, and by the end of this year, that number is expected to reach over 50%.

To put this in perspective, the iPhone was introduced in 2007. 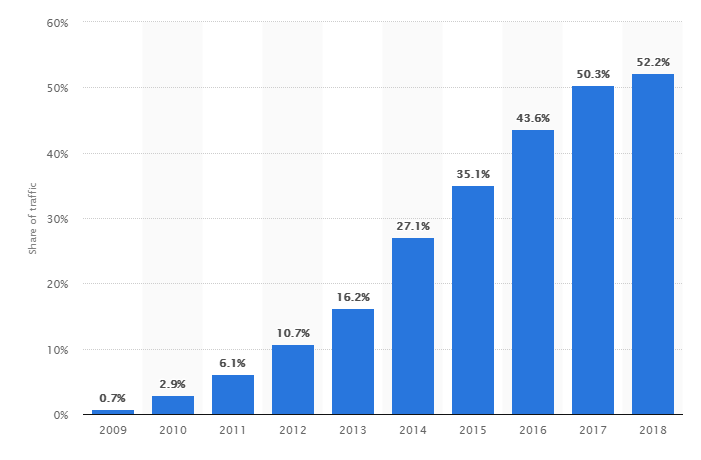 4. With such high numbers, it makes sense that Forbes reported that mobile advertising would drive 75% of all digital ad spend this year.

6. Despite this, smartphones still lag behind in terms of revenue, generating only 45% of online shopping orders.

8. Speaking of mobile shopping, did you know that it’s the fifth most popular activity on mobile internet-using devices? 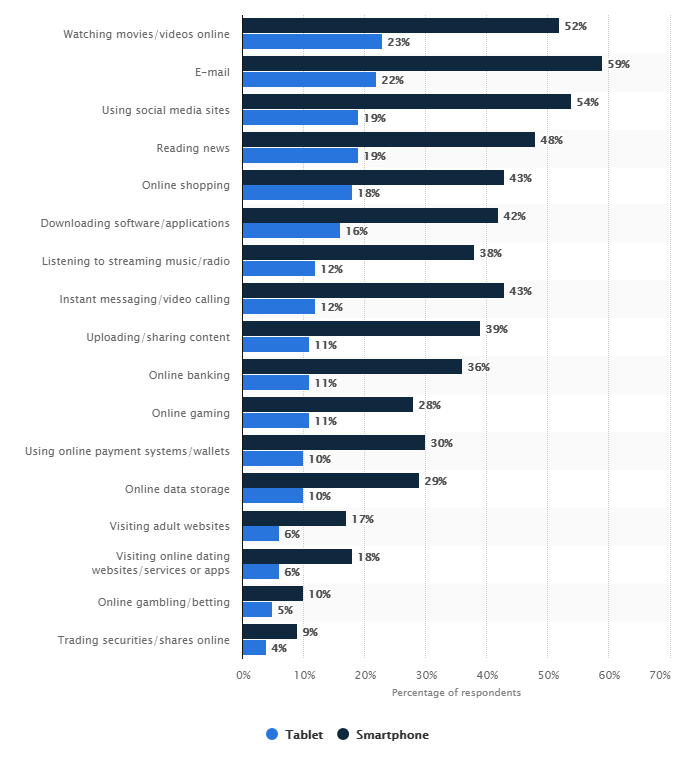 9. On the topic, 80% of smartphone users are more likely to purchase from companies whose mobile sites or apps help them easily find answers to their questions.

10. If this doesn’t scream mobile website optimization, then maybe the fact that 53% of mobile website visits are abandoned if a mobile site takes longer than three seconds to load.

12. Even worse, if people have a negative experience on mobile, they’re 62% less likely to purchase from you in the future.

13. Specifically in retail, for example, Google found that a one second delay in mobile can impact mobile conversions by up to 20%.

14. Going back the the most popular activities on mobile internet-using devices, as you can see, using social media comes in third. That being said, East Asia was ranked first with mobile social media penetration worldwide, followed by North America with 61%, South America and Northern Europe both with 57%, and Central American with 56%. 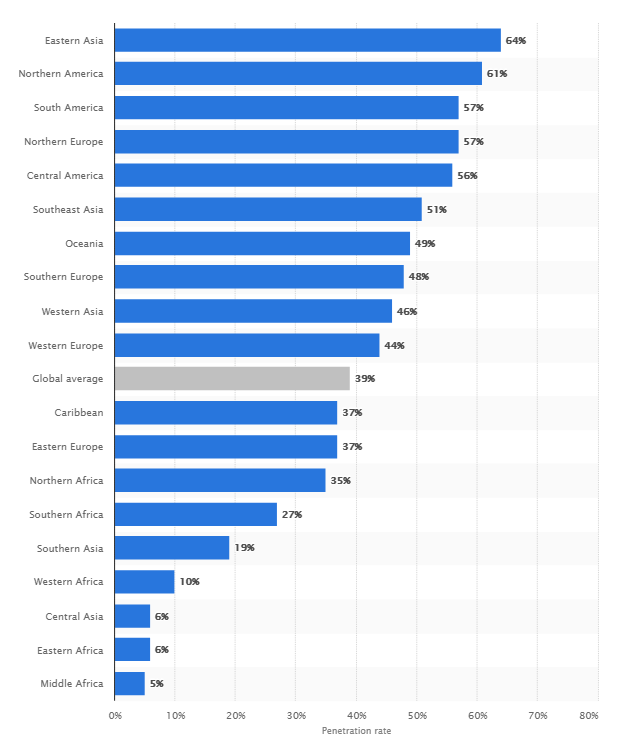 16. Speaking of January 2018, as of that date, 95.1% of active Facebook user accounts accessed the social network via a smartphone.

When you combine this with the mobile ad spend knowledge seen above (statistic #4), it’s clear that advertising trends for 2019 will involve taking out Facebook ads.

17. Switching gears, as of the third quarter of 2018, Android users were able to choose between 2.1 million apps to decide what they liked the most.

20. And finally, by next year, it’s expected that the total count of AR/VR based apps will go surpass 5 billion.

There you have it — some mobile marketing statistics and trends to help you plan for 2019.

Choosing the alternative—sticking with a desktop site—will not only prove annoying to your users, but detrimental to your bottom line.