For one, they’re especially susceptible to negative emotions because they haven’t developed the necessary coping mechanisms to deal with effects of prolonged Internet and social media use. This is exasperated further when you consider that they’re spending more and more time online instead of pursuing activities that encourage positive emotional health, such as exercising, and socializing with friends.

As a matter of fact, social media and depression studies found that social media users who consume the highest amountof content report a decrease in social bonding and an increase in loneliness. Think about it, what else can you expect if you spend most of your time online, by yourself?

Social Media and Depression in Youth

It may seem that social media is bad, but the reality is that it’s not inherently bad, not at all. The problem comes with usage. Using social media as it was intended — connecting with friends and family — can be categorized as positive usage. Looking at cute cat videos and participating in similar activities that elicit positive emotions are also examples of positive usage.

The difficulty is when positive usage is replaced with negative usage; when people partake in what’s called ‘surveillance use’ of social media. For example, when users log in to check up on how and what their friends are doing and compare it to their own lives.

The Problem with Surveillance Use

The pitfall of surveillance use is that it paints an unrealistic picture of life. As a University of Houston study explains, social media “gives us information about our friends that we are not normally privy to, which gives us even more opportunities to socially compare.” Without social media, how are we to know that Mike is having a wonderful time with his significant other? How are we to know that Caitlin is having the time of her life in the Caribbean? In a sense, social media opens a window into the life of others that only shows wonderful weekends, fun-filled vacations and perfect relationships. 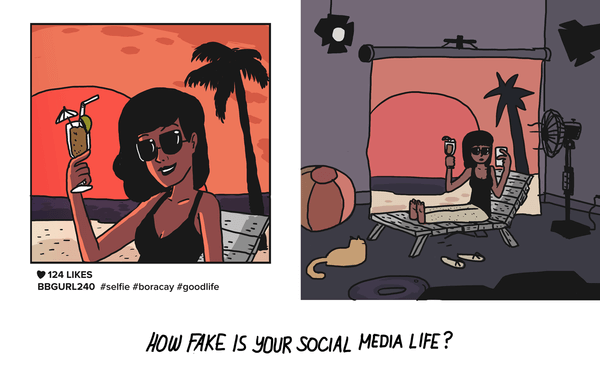 Unfortunately, many — especially teens — don’t understand that when people post on social media, they post the good things; they post a highlight reel of their life that leaves others feeling depressed because here they are, staring at a screen, while their friends are out and about enjoying life. They don’t understand that this is not a real representation of life. It’s a facade that results in unfair comparisons in which people compare apples to oranges.

What results is an unreliable view of the self that leaves teens at risk of depression and envy; they’re envious because they don’t lead the life they think their friends lead, and they’re depressed because of the frustration and disappointment that comes with it. Exemplifying this, researchers at the University of Missouri concluded that:

“If Facebook is used to see how well an acquaintance is doing financially or how happy an old friend is in his relationship—things that cause envy among users—use of the site can lead to feelings of depression.”

Adding fuel to the fire, social media and depression statistics state that using multiple social media accounts is strongly associated with depression and anxiety among young adults, whose risk for both increases by three times.

Even worse, we have to consider another ramification of social media: cyberbullying. Cyberbullying, a recent phenomena that increases the likelihood of depression by 3.5 times, has led many young adults and children to self-harm and even suicide. Maybe one of the most publicized instances of cyberbullying is the story of Amanda Todd, a young woman who took her own life as a result of cyberbullying.

Whether caused by the anonymity of the Internet or the fact that many social media platforms are largely unmonitored when it comes to interactions between individuals, social media and depression facts have shown us that it can have deadly consequences.

Like many things in life, social media has positive and negative aspects. It’s not wholly good nor is it wholly evil; it depends on how it’s used and how its content is consumed. On one end, you have positive usage that’s uplifting and leads to positive emotions and laughter. On the other end, you have negative usage characterized by anxiety and depression. Any one person can go back and forth between the two, but more often than not the effect of negative usage predominates.