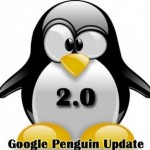 Google announced that they have rolled out next generation of Penguin web spam algorithm on May 22, 2013. With the result about 2.3% of English US queries will get affected to such a degree that any user might not notice. This new Penguin 2.0 update has also been rolled out for other languages world-wide. It is said to be an updated algorithm and not just a data refresh.

It was announced by Google Spam Mentor Matt Cutts that this update will have pretty big impact on Google Search Engine Ranking. This has been called a brand new generation of algorithms. The earlier Penguin updates had basically their impact only at the home page of a site. However this recently launched Penguin 2.0 update would necessarily have a major impact on the deeper pages of the website or blog.

The previous updates launched by Google were:

The Penguin algorithms which were released last April, were designed to reduce link building spam and also website hit which had link profiles that appeared quite unnatural.

This Penguin 2.0 update is all set to target black hat web spam techniques. The new Penguin 2.0, a next generation Penguin, will be much more comprehensive than Penguin 1.0 and it will go deeper and have a larger impact than the original.

As per Matt Cutts, if you focus on high quality content which drafted for the user, then you really don’t have much to worry about and penguin update.

Many changes have been created by this update e.g. ranking of some major keywords in the SERPS  have resulted  many sites to drop out of the top Google pages. While less popular sites with wrong keyword placement have also lost their place.

To prevent your website from Penguin 2.0 effect; the best possible way out is to focus on creating high quality content which should be in a sharable format and develop a natural link distribution strategy for your website.