Voice technology has been a central theme of many Sci-Fi movies throughout the past fifty years because it’s something that we associate with the future. From HAL plotting the destruction of the human race in 2001: A Space Odyssey, to VIKI turning robots against humans in I, Robot, voice technology is a constant that we see time and time again. Ignoring our tendency to group technological advancement with our race’s downfall, we weren’t far off in terms of voice technology trends. True, we’re still not at the same level as HAL or VIKI, but we’re getting pretty close. So much so that voice technology isn’t something that should come up when discussing the future, but instead when talking about the present.

Voice technology as we know it is comprised of two components, speech and voice recognition. Even though our focus today is going to be on speech, it’s still important to know the different facets of voice technology. Speech recognition converts spoken words into digital words and is measured by its accuracy and speed, and voice recognition does what it states, namely identifying speakers by different features of speech such as intonation, pitch and style. A key differentiating factor is that while speech is language dependent, voice is language independent and instead utilizes voice biometrics as a reference point.

Speech recognition is used by many people, for a lot of things. Doctors use it to transcribe notes, authors use it for dictation, diplomats use it for translations, and I use it because it makes me feel like I’m talking to the ship’s computer onboard the USS Enterprise. Cool fact alert, the ship’s computer not only can recognize speech, but also identify speakers and make the distinction between direct commands and conversation between crew members. Okay, with my one and only geeky aside out of the way (no more, I promise), let’s go back on topic.

Speech recognition is powered by a form of AI that ‘learns’ from use. It uses deep learning, an AI technique that  feeds data through deep neural networks to a computer system, to make decisions. It also uses natural learning processes, another AI technique that is working towards bridging what is said and what is meant. In other words, search recognition is a natural way of interacting with technology that takes intent and contextual meaning into the equation.

What the Experts are Saying About Voice Technology 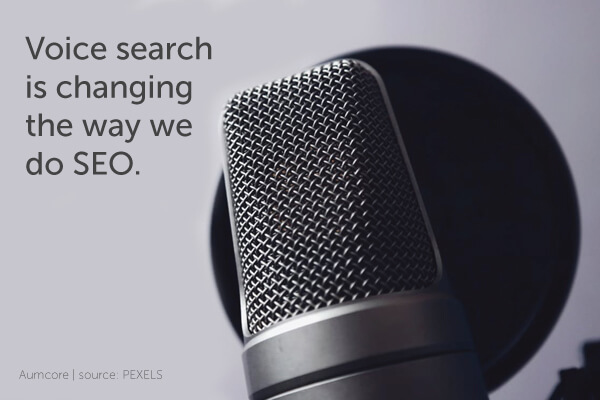 With the many possibilities that voice technology brings with it, it’s no surprise that experts all over the world are making predictions about what it entails and what’s to come.

Voice technology is currently limited to Q&A queries and explicit commands. During a voice search roundtable discussion hosted by SEMrush, Will Critchlow, founder and CEO of Distilled, said that for him, “[voice search] is still in that uncanny valley where it’s not quite good enough to rely on.” Neil Walker, Technical Director at Online Ventures Group, added, “we’re still in the very early days, but I  can see voice search literally changing the search landscape in some way over the next few years.”

Another of Critchlow’s predictions is that “alongside voice search, we’re going to see a huge growth in query-less search.” Because RankBrain, one Google’s AI algorithms for search, interprets searches as opposed to matching words, he believes that online businesses must consider and rank for intent in their voice search optimization techniques. Considering that RankBrain’s ability to semantically predict needs is already improving the way we interact with search in a predictive manner, it makes sense that the next step is query-less search.

Prediction 3: Voice Search Is on the Rise

All of these predictions seem to point at one conclusion, that voice search is on the rise. Michael Boland, BIA/Kelsey’s Chief Analyst and VP, Content, agrees and predicts, “voice will reach 25% of mobile search volume. This will mostly happen through personal assistant apps such as Google Assistant, Microsoft Cortana, Apple’s Siri, and Amazon’s Alexa.” As a matter of fact, both the speech and voice recognition markets are expected to grow between 2015 and 2022. The former from $3.73 billion to $9.97 billion, and the latter from $440.3 million to $1.99 billion.

What Voice Technology Means for You

By now you’re wondering what all of this means for you. Considering that 20% of searches on the Google mobile app and Android devices are voice search queries, it means you’re going to have to account for voice search optimization in your marketing endeavors. Sound like something you’re interested in? Of course it does, so check out this post for some help with voice search based organic traffic. Voice search is faster and easier than unlocking a phone or going to a website. It’s hands-free, fun, and quite frankly, more accurate than texting. What’s easier, looking at your phone as you search for something (or, let’s be honest, text) or pressing a button and asking one of the many virtual assistants on the market like Alexa, Google Assistant, Cortana, and Siri? As far as being conversational is concerned, it seems like an Amazon Alexa vs Google Home battle. Both can perform a myriad of tasks, provide near limitless information thanks to search engines, and even make purchases. 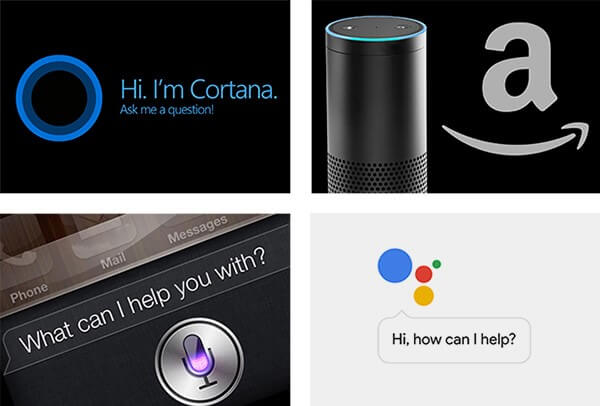 Brands Making Use of Voice Technology

Some brands have already taken the initiative and made use of voice technology trends. Campbell’s created branded skills for Amazon’s Echo device that allow users to ask for recipes straight from the “Campbell’s Kitchen.” You can also ask Alexa for suggestions based on your taste profile, the weather, and even what’s currently trending. You ask, she reads, you follow, and BAM, you have a tasty dish. Domino’s offers a similar skill for Amazon’s Alexa and took an extra step to optimize for other devices. The program is called Domino’s AnyWare, and you can order from Alexa, Google Home devices, and Dom, the pizza expert who resides in their app for Android devices. Once you order you can track the delivery and, like me, wait behind the front door with a big grin because you’re about to eat a delicious pizza. A final example comes from the conglomerate, General Electric. They’ve given Amazon Echo owners a real treat and allowed them to control their WIFI-connected appliances with voice commands. You can integrate Alexa into more than 70 models of ovens, dishwashers, refrigerators, washing machines, drying machines, and so on. Ladies and gentlemen, this is exactly what the Internet of Things is all about.

Are You Planning on Making Use of Voice Technology?

The ball’s in your court and it’s your turn to decide what to do. Are you going to pay heed to the voice search statistics and optimize for voice search queries, or are you going to stay in the dark? Optimize? Good answer. Remember, while searches done by text are a form of keyword-focused shorthand, voice search is more natural. Think conversationally and place more emphasis on long-tail keywords. If this is out of your league, consider going to your neighborhood digital marketing agency that does everything from mobile app development to SEO optimization. In any case, good luck!