As a tech writer, I find it astounding how often I find myself drawing parallels between the latest innovations and products that I recall seeing in movies and shows long ago. It seems that time, aided by technology is catching up with me- the futuristic gizmos I recall from decades ago are no longer works of fiction.

Honestly, it makes me feel old but at the same time, I can’t help but marvel in the utter absurdity of modern technology. We’ve breached the threshold of imagination and reality and now exist in a world where virtually any concept is plausible. Case in point- these examples of ‘recent’ innovations that have actually long existed in the minds of storytellers:

Growing up, we got to witness Dick Tracy’s awesome two-way watch radio in action as he communicated with the police.  We also saw an abundance of spy movie heroes frequently touting their special super watches. Today, Smartwatches are being released with fervor, from every possible tech provider as the dawn of wearables is upon us.  And while modern Smartwatches may not be equipped to shoot lasers a la James Bond, they can wirelessly pay for stuff while tracking your heart rate.  One step at a time, I guess.

Watching Tom Cruise’s almost symphonic gestures in Minority Report was captivating; not only for the delicate manner with which he waived his arms about, but also the effect it had when he did.  Virtual objects and screens suspended mid air willingly moved about with every flourish- a premise which at the time, seemed utterly, fantastically futuristic. Nowadays however, products like Microsoft HoloLens are ambitiously bringing this concept to life through augmented and virtual reality as well as the use of Holograms.  For those of us who have always longed for telekinetic powers, it’s time to get excited, because a version of it will definitely be available in the near future. 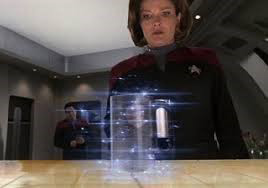 Star Trek predicted the future when the show introduced the ‘Replicator’- a machine that could reconstitute matter in some fashion or another in order to produce food and drink, equipment, uniforms and pretty much whatever else the user fancied.  For every child and adult who drooled at the thought of such a machine, there now exists 3D printers that sort of fit the bill.  Of course, it’s impossible to simply conjure tangible objects from thin air, but 3D printers can make food production faster, and they are able to create clothing, hardware and with enough money and time, even spare body parts!

Were the creators of these sci-fi flicks accessing some sort of stowed away omniscience when they created their then-fictional gadgets? Probably not. It’s far more realistic to assume that the Replicator was a figment of its author’s imagination, born out of an idea for something equally desirable and useful.  Imagination breeds’ innovation, and technologists are better than ever at transforming ideation into palpable solutions. So dream on dreamers, because we all collectively determine the tech-filled world we’ll soon be living in!