If you’re interested in alternate realities, mainly virtual (VR) or augmented reality (AR), you undoubtedly know that Facebook introduced Facebook Spaces last year. Marketed as a way to connect with your friends and family in virtual reality, it’s looking to be a game changer for those who’ve dreamed of somehow connecting with others across the globe in a way that’s more ‘real’ than a phone call or video chat.

As Facebook explained, “[s]pending time with friends and family creates many of our most meaningful memories, but it’s impossible to always be physically near the people we care about. That’s where the magic of virtual reality comes in.” Well, Spaces does just that; it’s basically a VR app where you can interact with friends in an interactive virtual environment, just as if you were in the very same room.

You can find the beta for Oculus Rift and Touch in the Oculus Store, and as of this past December, cross-platform functionality with HTC Vive is available as well. Rachel Rubin Franklin, Head of Social VR at Facebook, explained the update in a Facebook post:

VR is such a powerful way to feel present with the people you care about when you can't physically be together. With Facebook Spaces, we've always been committed to bringing the power of social VR to as many people as possible, across platforms and devices.

That's why I'm super excited to announce that today we're taking Facebook Spaces cross-platform for the first time, making it possible for even more people to spend time with their friends and family in VR. HTC Vive owners can now use Spaces with a Vive headset.

In the new app, Vive owners will find all the same fun features as the Rift version — you can create your own avatar, view Facebook photos and 360 videos, play games, draw with markers, go Live, make Messenger video calls, and (my favorite) take awesome selfies. Plus it's cross-platform compatible, so Vive users can also hang out in Spaces with friends who use Rift.

Anyway, whether you’re more Oculus or Vive makes no difference anymore because once you’ve downloaded Spaces, you’re ready to join in on the fun. You’ll first be prompted to create a virtual identity that’ll represent the real you as you interact with the app. After browsing through your Facebook photos and choosing one to serve as a template, you’ll see a couple of options to modify your virtual appearance. From hair and eye color, to hairstyle and facial features, you can modify to your heart’s content until you feel your virtual self represents your real identity.

The real fun then begins as you and your friends enjoy all that Spaces has to offer, such as drawing in mid-air with a virtual marker, taking selfies with a virtual selfie stick, exploring new places with 360 videos and photos, reliving memories from your Timeline, and so much more. You can even connect with the real world via Messenger video calling and bring friends into your virtual world. Once they answer your call, a window to the real world appears in front of you while a window to yours appears on their screen.

If that’s not enough, you can also share live videos on Facebook from Spaces for greater interactivity. As soon as you go live, you’ll have a virtual camera you can position anywhere at your disposal. In the real world, friends can comment on your broadcast, comments that turn into a stream [of comments] you can pull out as physical objects. Cool, I know.

One final thing, Facebook also made it a point to enforce that Space is all about connecting with friends in YOUR space, and you’re able to control your experiences by pausing whenever you want — an action that moves you into a quiet space where you can relax and take a break from other people and activities.

Looking Toward the Future 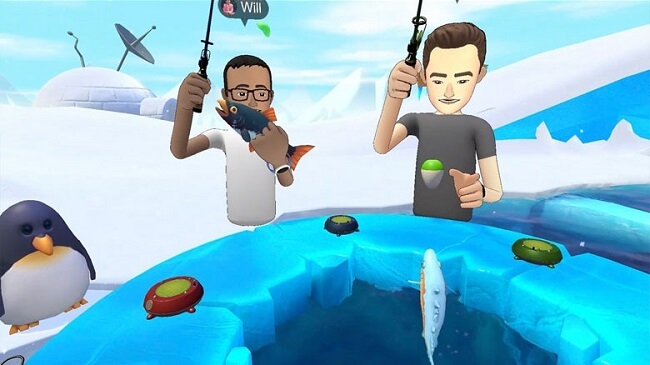 When Spaces launched, users had markers to draw and selfie sticks to snap. That was then; Facebook is now rolling out Kits that allow us to combine and mix items into games, social activities and more. They’re also partnering up with more developers to build more content for Spaces. For example, Revolution Games, one of their early partners, turned the Spaces table into an ice fishing experience for all to enjoy.