The Expected Growth Rate OF Adoptions OF Mobile Apps 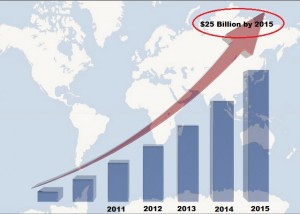 Whether its iTunes or Google Play; the explosive adoption of iOS and Android smart phones devices are clearly visible. By MarketsandMarkets projects report; Apple’s App Store i.e. iTunes hold nearly up to 20.5% of that particular section, while in the global market, it is forecast to record a CAGR (compound annual growth rate) of 29.6% from 2009 to 2014.

With new and advance network technologies that are lowering the mobile data usage cost, directly affecting the growth of the adoption of smartphones around the world, and a continuous increase in application usability.

With the emergence of smartphones and tablets, they are giving a new platform for software developers; via this an entire new class of software entrepreneurs has emerged. In this, the majorities of players are new and belong to small businesses.

According to this report, North America led the market since 2009 with a 41.6% of revenue share. However, Asia is the largest market in terms of downloads with 36%. In the business category, it has the largest percentage of company developers, due primarily to the popularity of apps that connect mobile users to existing services such as PayPal, UPS and FedEx, the survey found.

From a survey by comScore, if we compare mobile web vs. mobile apps then 127.6 million mobile users in the U.S. and 108 million users in Europe consumed mobile media through their mobile browser or application in 2011, about a 30% increase over 2010. 81% of users prefer mobile sites to apps for price research, 79% for product reviews, and 63% for purchasing (Adobe Mobile Experience Survey & eMarketer 2011 via SearchEngineLand.

The application market is expanding in a very fast manner. We have to understand its usability and exclusivity to demonstrate the best in each one. No doubt this growth is not going to decrease in next 3-4 years but one need to understand the usability and importance to bring something new in the market which not just make tasks easier but become a revolution.